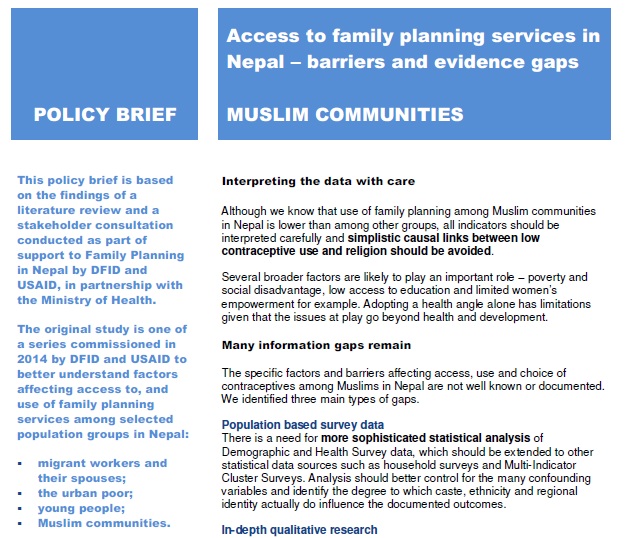 Although we know that use of family planning among Muslim communities in Nepal is lower than among other groups, all indicators should be interpreted carefully and simplistic causal links between low contraceptive use and religion should be avoided. Several broader factors are likely to play an important role ‒ poverty and social disadvantage, low access to education and limited women’s
empowerment for example. Adopting a health angle alone has limitations given that the issues at play go beyond health and development.

The specific factors and barriers affecting access, use and choice of contraceptives among Muslims in Nepal are not well known or documented

This study focuses on one of the key components of the COVID-19 response in Nepal: health workforce management in order to address the surge in demand for services. The ...

Exploring Social mobilization activities during the COVID-19 pandemic in Nepal

Since the outbreak of COVID-19, the challenges faced by Nepal’s health system have been exacerbated and further strain has been placed on an already fragile health ...

Traditional VSC camps tended to focus on delivering male and female sterilisation services only. This pilot and its evaluation aimed to assess if provision of a wider ...

There is considerable evidence suggesting the existence of high unmet need for, and lower use of, family planning among male migrant workers and their wives who remain ...

This briefing paper highlights the main findings and recommendations from a pilot study that assessed the availability of gender and social stratifiers (such as age, ...

We conducted a study to assess measures taken by the government of Nepal to prevent and control COVID-19 and its impact on health and livelihood of the urban poor. The ...

Integrating tobacco cessation within the TB programme: findings from the ‘TB & Tobacco’ study

In Nepal, the prevalence of current adult tobacco smoking is 18.5% (27% for male and 10.3% for female).Smoking increases the risk of acquiring TB infection & doubles ...

Despite the fast pace of urbanisation and the high proportion of poor people thought to be living in urban areas or urban slums, and an increasing policy focus on these ...

Positive policies are in place in Nepal to help improve young people’s sexual health and family planning. The extent to which these policies are implemented (and ...